Causes and Research of Surface Scratching on lighting sheet aluminum

With the increasingly fierce competition in the aluminum sheet and strip processing market, if enterprises want to achieve better development, they must work hard in the direction of "high quality, high efficiency, low cost, energy saving, and environmental protection". lighting sheet aluminum is a product with high surface requirements, and it is also a high Value-added products are a direction for enterprise product structure adjustment. In recent years, mirror polished aluminum has developed rapidly and has been widely used in various high-end civilian products, such as hotels, home bathroom doors and home appliances. Mirror polishing technology can make the product look luxurious and beautiful. At present, it has been widely promoted in developed regions such as Europe, America and Southeast Asia, and has a good market prospect [1].

lighting sheet aluminum can be obtained by electrolytic polishing, chemical polishing, mechanical polishing, rolling and calendering, etc., and the color of the product can be adjusted according to different needs, so that the appearance of the produced product is more colorful and beautiful [2]. The lighting sheet aluminum introduced in this article refers to the mirror effect on the surface of the strip by rolling and calendering. Such products are widely used in lamps, high-end interior architectural decoration, architectural appearance, interior and exterior decoration of automobiles, signs, nameplates and other fields [3], which are a branch and extension of high-surface aluminum strips. However, lighting sheet aluminum is prone to scratching defects in the production process, which seriously plagues the improvement of the quality of mirror products, resulting in a decline in yield and ultimately affecting economic benefits. 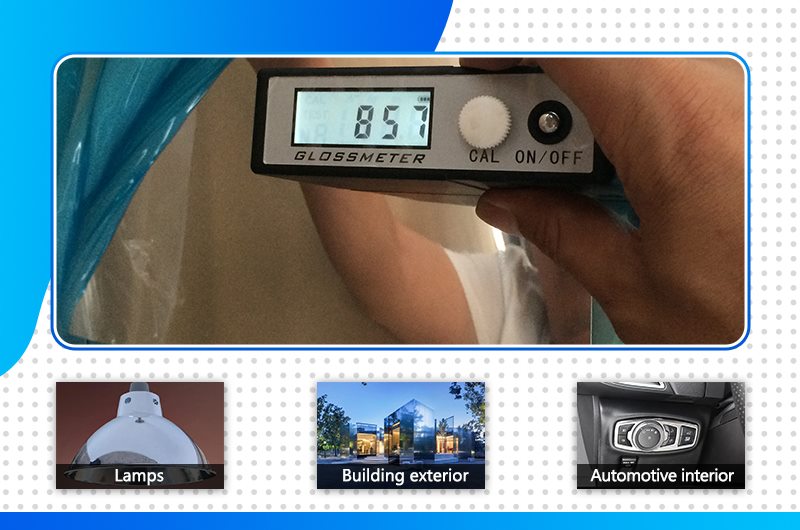 Scratching is a surface defect that is formed after the surface of the material is damaged after being rolled by a roller, although it has no hand feeling but affects the appearance of the material surface. In this paper, the morphology, the mechanism of occurrence and the direction of solving the scratching defects on the surface of lighting sheet aluminum are studied through comparative experiments, and it is expected to find a breakthrough and a solution to the problem.

There are 2 groups of test plans in this test, each of which has only one variable, and the rest of the process conditions are the same.

The test protocol is shown in Table 2.

Track the whole process of the test. Before rolling the mirror surface, it is required that the surface of the aluminum plate should not be visually visible for scratching defects. In order to exclude the possible subsequent scratches caused by head and tail defects, samples were uniformly broken in the middle of the roll during the mirror rolling process, and the surface defect morphology was observed, and the macroscopic morphology was compared. The test results are shown in Table 3.

The scratch defects were analyzed by OM, SEM and EDS.

The OM observation results are shown in Figure 1. Under OM observation, white line defects appear as black bars. The black point defects are arranged along the rolling direction to form macroscopic linear defects.

Under SEM observation, white line defects appear as white stripes. The white point defects are arranged along the rolling direction to form macroscopic linear defects, the width of which is determined by the size of the point defects.

EDS analysis was carried out on the normal aluminum surface and the defect, and the results are shown in Figure 5 and Table 4.

The composition difference between the white line defect and the base aluminum alloy is small, and the oxygen content is high.

Reason: Insufficient lubrication during hot rolling production caused the surface to stick to aluminum. After repeated rolling, the defect was healed on the surface of the material, and the scratch defect appeared after polishing.

During hot rolling, the aluminum plate and the roll are rolled under the conditions of high temperature, high pressure and high friction. The basic function of hot rolling lubricating fluid is to reduce friction, prevent the roll and the rolling piece from sticking, and control the temperature and roll shape of the work roll at the same time [5]. During production, an emulsion with both cooling and lubricating functions must be used as a cooling lubricating liquid to form a uniform lubricating layer on the surface of the roll to avoid direct contact between the roll and the aluminum plate. The properties and indicators of the emulsion determine the quality of the hot-rolled aluminum sheet and strip to a large extent. Therefore, it is necessary to formulate a reasonable hot rolling process parameters, especially the emulsion indicators should include concentration, hydrophobic viscosity, particle size, ash content, pH value, electrical conductivity, ESI, emulsion temperature, etc., and filter, skimming, etc. as required. , so as to ensure that the mirror blank is well lubricated and does not have sticking aluminum defects.

(2) Judging from the two sets of test conditions, there are no scratches on the surfaces of the first and second passes of rolling and polishing, while the third and fourth passes begin to appear and increase. From the scribing microscopic topography optical microscope OM, scanning electron microscope SEM and energy spectrum EDS analysis results, in the microscopic state, the surface of the aluminum material has been damaged, and a new oxide layer is formed on the damaged surface, which is granular Arranged vertically.

Reason: In the process of coil transfer, any irregular lifting and placement will cause damage to the surface of the coil, resulting in aluminum powder pressing into the surface during rolling, forming surface defects and healing, and surface defects appear after polishing. Therefore, it is necessary to standardize every action in the production process, including refining each link such as unloading, lifting, placing, and transfer, and create conditions for suspended transfer as much as possible.

(3) The degree of scratching on the surface of alloys of different grades is different. The softer the alloy, the more prone to scratching defects.

(1) Insufficient lubrication during hot rolling production can easily cause the surface to stick to aluminum. After repeated rolling, the defects are healed on the surface of the material, and the scratching defects appear after polishing.

(3) During polishing and rolling, aluminum powder continuously enters the rolling oil. If the filtration quality is not good or the purging is not in place, the aluminum powder will be pressed into the plate surface to form fine scratches.

Therefore, it is necessary to control the hot-rolled emulsion management, coil transfer and rolling oil products to reduce the probability of scratches on the surface of lighting sheet aluminum.

Next ：Introduction and application scope of mirror finish aluminum sheet